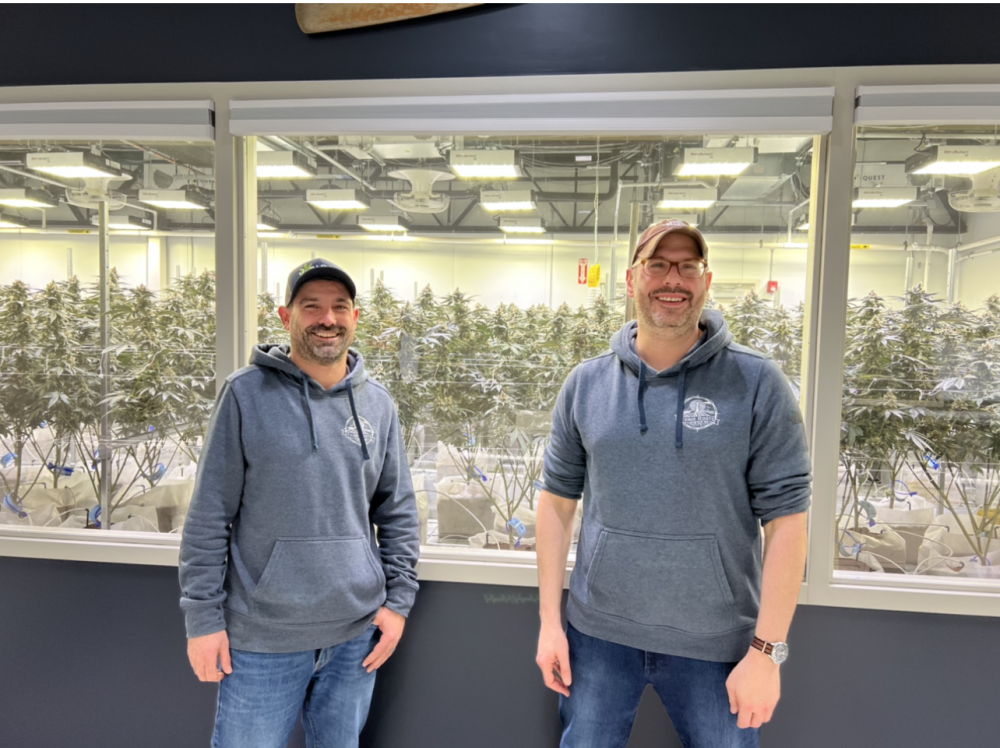 Trade Roots now has its final license, which means the company can start moving its inventory into the retail space at 6 Thatcher Lane in the Kendrick Road industrial park. After one final state inspection, the business will be cleared to open.

Carl Giannone and Jesse Pitts, the company’s co-owners, said they expect the dispensary will be open by the end of February.

Over recent months, the company has been growing and processing cannabis into a variety of concentrates.

Visitors to Trade Roots will be able to get a peek behind the curtain, as it were, through a window from the dispensary into one of the grow rooms.

“To me, that’s the true highlight of the retail space,” said Pitts. Visitors will be able to see the plants throughout their life cycle.

“Over the last few months, we’ve really been building an inventory of our own,” said the Wareham native. Pitts explained that through Trade Root’s concentrate collaborations, the company has built partnerships with many producers across the state.

In December, one of Trade Roots’ extracts was named the concentrate of the month by Northeast Leaf, an industry publication. The extract was made from cannabis grown by Good Chemistry — one of many partnerships with other local cannabis growers.

The dispensary will feature about half Trade Roots products and half products from other producers.

“We’re going to have the best selection in the area,” Giannone said. “Anything good in the state will be on our shelves.”

Giannone said that Trade Roots has hired a great retail team and worked collaboratively to create the space.

Pitts and Giannone also hope to make the retail experience better for customers. At many dispensaries, customers are given a paper menu with limited information about products — strain, price, and total cannabinoid content. Customers can’t see or smell the product before buying it. With so little information, Giannone said, people often buy what seems to be the best bargain: the highest cannabinoid level for the lowest price.

But that means they might be missing out on products they would enjoy.

Pitts said that being able to see the product is important to him. Customers will be able to see both concentrates and flower in special displays called “bud pods.” Retail staff will focus on consumer education.

Pitts and Giannone said that they have a hyper-local focus, and want to cater to local consumers — and thanked people for their patience.

Aspen Blue, the Rhode Island-based company that will be operating out of the steel building at the old Tremont Nail Factory, received a provisional license. That means they can start construction on the inside of the building to convert it into a manufacturing facility.

Matthew Wilkes, the company’s chief business officer, said that construction is expected to start in a few weeks and wrap up by the end of the summer. He said he hopes to receive a final license about three months after finishing construction.

“I think Massachusetts has the best market in the country,” Wilkes said.

Once open, the facility will manufacture edibles and gummies — plus some more unique products, Wilkes said.

“We have a couple of products that I’m really excited about that I haven’t seen anywhere on the market,” Wilkes said.

Doobie, a delivery company, also received a provisional license. The company’s delivery operation will be headquartered at the town-owned building at 4 Recovery Rd., i.e. in the Kendrick Road industrial park. No sales will take place on site. The company plans to cultivate and manufacture cannabis products in the future.

There are several other cannabis businesses already open in town.

Verilife, on Main Street, has been open for several years. The town’s third marijuana retailer, Nature’s Medicines, is located on Cranberry Highway in the old Sears appliance store, and is marked with “Coming Soon” banners as it awaits a final retail license.

Other companies are still working through the Cannabis Control Commission’s regulatory processes.

Cannabis Products Alice - May 21, 2022
0
More than 90 cannabis-related bills were filed at the beginning of the session, but as lawmakers wind down their time at the Capitol, only...