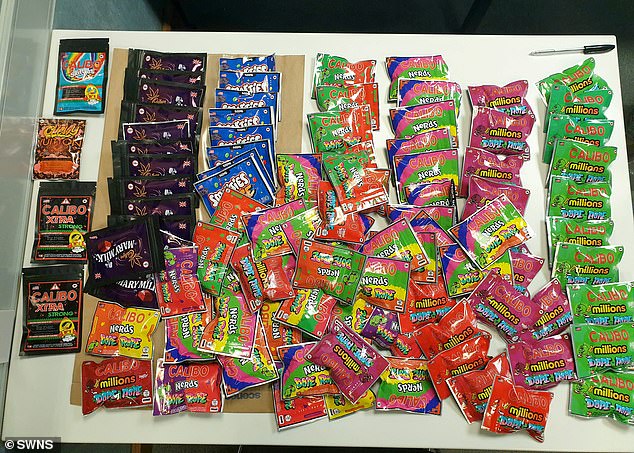 A gang who sold cannabis sweets disguised as Smarties and Nerds through Snapchat and Instagram have been sentenced after pleading guilty to drugs charges.

The three-person outfit dispatched ‘dangerous edibles’ which contained THC, the main psychoactive compound in cannabis, through the post.

Reo Mangal, 24, Olivia Butler, 24, and Ceroan Mangal, 35, were found to be selling the drugs across the UK using social media.

These were wrapped in packaging branded with the word ‘Calibo’ while the wrappers were designed to look like conventional sweets.

Reo Mangal, pictured, has been jailed for 30 months in prison for his role in the criminal enterprise

Among the stash there were also cannabis edibles branded ‘Mary Milk’ and cans of THC infused ‘Kool Aid’.

The gang was discovered after Butler was stopped driving a car without insurance in Camden, North London, in January 2021.

When questioned, she claimed to have no idea what was inside the boxes and said she was simply delivering them to another person on behalf of a friend.

But the scale of the operation was revealed after officers trawled through 114,629 text messages and 67,964 photos on Butler’s phone, which linked her to Reo and Ceroan Mangal.

The group had been selling the treats to customers across the UK via the social media apps Snapchat and Instagram.

Money was paid into three bank accounts linked to the group once the ‘goodies’ had been delivered to customers by post.

The three suspects were arrested and charged after a series of raids, carried out on three properties in October 2021, uncovered ‘overwhelming evidence’.

All three were sentenced at Wood Green Crown Court.

Detective Inspector Darren Jones said: ‘This group brazenly thought they could get away with selling dangerous substances in plain sight on social media.

‘The hard work of our officers has put a stop to their criminality and closed a significant supply chain.’

Ceroan Mangal, of Pemberton Gardens, Archway, was sentenced to eight months, suspended for 24 months, after pleading guilty to possession of class B drugs and being concerned in the supply of class B drugs

DI Jones said: ‘The impact of these substances should not be underestimated – they can cause an adverse reaction.

‘Edibles are typically stronger than other cannabis products and it’s impossible for the customer to know what ingredients have been included.

‘Removing drugs and other dangerous substances from our communities is key to reducing other associated crimes that happen as a result of drug dealing, such as violence and anti-social behaviour.’

A separate investigation into where the group bought the products from is ongoing.

This comes after it was revealed that county lines gangs are using cannabis edibles to entice young children into a life of crime.

The dodgy treats – laced with mood altering ingredients which cause sickness, hallucinations, unconsciousness, tiredness and heart problems – are increasingly being used to persuade kids to do dealers’ dirty work.

It has warned parents to be alert to the danger of the illegal sweets and exploitation of kids.

ERSOU’s Detective Inspector Kelly Gray said: ‘We are starting to see an increase in the use of cannabis edibles by county lines groups, and are concerned about the groups enticing young people into working for them by supplying them with cannabis edibles before going onto exploit them , using them to carry out a wide range of criminal activity, including acting as couriers to ferry drugs from one area to another.

‘The edibles themselves are also dangerous. The illicit manufacture of such sweets means production is unregulated and thus levels of potency can vary, not to mention there being a high chance of other harmful substances being mixed in.

‘The fact that these sweets are also commonly supplied in packs, and that they can take longer than other cannabis products to start to take effect, means the potential for accidental overdose is highly likely, particularly in young people unaware of the dangers.

‘We’re asking parents in particular to be aware of these products and look twice at any sweets or chocolates their children may have in their possession, as well as being alert to the signs that children may be involved in county drugs line activity.’